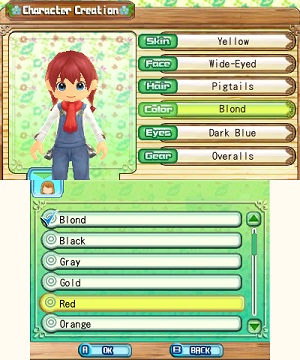 The Harvest Moon franchise is celebrating its 15th anniversary this year and with this milestone comes the company’s first Harvest Moon title developed solely for the Nintendo 3DS, Harvest Moon: A New Beginning. At Natsume’s booth during E3 this year we were given a full run down of this brand new title, including a number of its new features, as well as a small bit of hands-on time with the title.

The biggest feature to Harvest Moon: A New Beginning is the fact that players will quite literally be able to customize everything, from the appearance of their characters, the layout of their farm, appearances of their buildings to even moving around the buildings in the main town! While this could potentially cause some confusion, the lower screen displays the layout of the town with each building displaying the occupants’ face. This creates a very interesting system where players can move the buildings in the town to fit their playstyle. 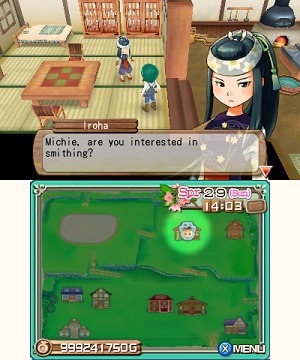 For example, if the player is choosing to go after a certain bachelor or bachelorette then they can simply move their house closer to their farm. Or perhaps you are eager to create a livestock raising farm, then you can move the livestock store close as well. Interestingly enough, two new animals have been added to the livestock list, with a Yak and a Llama entering the barnyard.

Another new feature which is making its first appearance in the Harvest Moon series is customization. Anyone who has played Harvest Moon before has likely spent countless hours foraging for various items. However the only thing players could do with these items was to either use them for cooking or simply sell them in their shipping bin. Now these items will be able to be used for the brand new crafting mechanic which can allow the player to build better houses, upgrade their fields and create a number of unique creations, including a robotic panda! 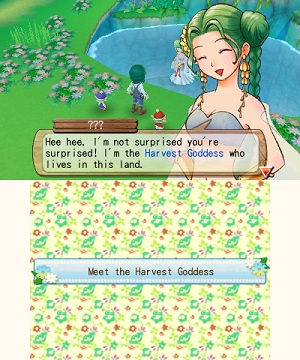 As standard with the Harvest Moon series, players will have four bachelors or four bachelorettes to choose from. There will also be two hidden romantic options, one for each gender, though who these may be was not revealed yet. Along with all of the other improvements to the game, the relationship system has been overhauled as well. In past games there were plenty of times that romantic interests could instantly fall in love with the main character.

Now however, there will be a gradual increase in the characters’ friendship towards the player, with romance eventually springing from this friendship. Interestingly enough, if the player ends up choosing a boyfriend or a girlfriend and starts flirting with other suitors, then their current partner can even become jealous. For those concerned about a possible break in marriage tradition, don’t worry. Natsume’s representative assured me that the blue feather would still be used for marriage proposal, though considering the new jealousy factor, gamers may wish to make sure who they want to chase after this time around, especially since the new romance options will have some interesting personality types.

MOOve on up with Harvest Moon: A New Beginning’s 15th Anniversary Edition